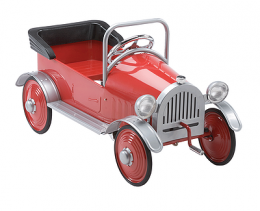 Pedal cars go back to the 1890's.  People were putting together cars by scraps they had around their home or barn to create these cars.  It was soon that the wealthy people saw an opportunity to take over and they began to produce a more lavish pedal car that they sold at high prices.

These cars were made of steel and lasted for years.  Even lasted for several generations in a family.  They were very durable.

There has been a great deal of change in the pedal cars since they began creating them.  Naturally, they have a more modern look to resemble the grown-ups cars

Only the wealthy was able to purchase these cars. In the 20's and 30"s as the pedal car became more "modern" at that time, it was still the toy of the wealthy.

After the bombing of Pearl Harbor,  they seized making pedal cars because steel was needed in the war.  They began again to produce the pedal cars in the 50's and the 60's  They were produced in man different models and colors.  These cars had working headlights, horns rag tops, movable windshields and chrome details, white wall tires, custom paint jobs and hood ornaments. The cars of the 5o's  and 60's were chain driven models.

In the 70's a plastic pedal toy car about and virtually put steel pedal cars out of business.  This became the interest of children and was more cost effective to produce.